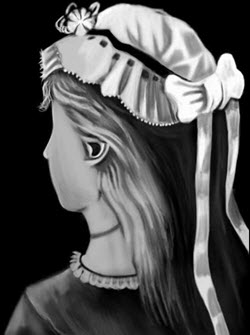 The Role of Human Sensory Perception in Anti-Counterfeiting Technologies

What do you see in this blog image — an old woman looking downward or a young girl looking away in the distance? As you continue to look at the figure, a stunning transformation will take place. You will eventually see both images, and your mind will begin flipping between one and the other as long as you look at the picture. This is a well-known example of an ambiguous stimulus that first appeared in a German postcard in 1888.

The instability of visual perception is well documented across several different image types from actual photographs, geometric shapes and inkblots. These examples show that our perception is susceptible to change when two different perspectives are equally possible. Only one of the perceptions will exist at any given time because the two versions cannot coexist.

This tells us that our interpretation of the visual world can differ based on the way our mind interprets what we’re seeing. Nothing changes about the image that falls at the back of our eyes, but the mind’s perception of that image can fluctuate based on varying cognitive factors involved in perceptual image reconstruction.

If it is possible for our perception to fluctuate, then can it also be the case that we could perceive something that is not even present in the first place? The figure below shows just that possibility. Known as a Kanizsa figure, the central white triangle does not actually exist but is vividly perceived because of the way the black discs are segmented and arranged with respect to each other. There are no physical contours that define the solid white triangle. Our mind has made it up. 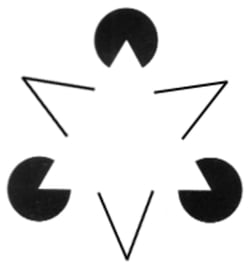 So, what does any of this have to do with brand protection strategies and anti-counterfeiting technologies? Everything. There is an interesting debate unfolding on the continued role of traditional approaches that rely on overt visual features such as holograms, micropatterns, optically variable devices, and so on, and whether these technologies should continue to prevail in the new digital age.

The traditionalists have argued that the new digital technologies cannot be relied upon and therefore we must still depend on our own senses when examining a product. After all, our senses have evolved over millennia and they have thus far served us well. Their argument further asserts that security labels such as tax stamps must include an overt cluster of visual features that empower consumers to use their own senses to determine product integrity.

Nothing can be farther from the truth. The images above represent only a small fraction of the large body of evidence proving that the human visual system is prone to a variety of different mental reconstructions and it can create perceptions of objects that don’t exist. To state that our senses are immune to being fooled is naïve and has been proven false by a vast body of neuroscience literature. That is not so say that evolution has created a flawed visual system. To the contrary, we see the world as we should most of the time, but it's not perfect. Gestalt psychology argues that we actively interpret what we see based on a mix of prior experiences, expectations and a logical sense of what we believe should be present. The Kanizsa triangle is a good example of this theory.

Let's now ask a very direct and somewhat uncomfortable question. Counterfeiting is a major threat to consumers, the economy and brand integrity, and is growing at a rapid pace. Why is that the case, and why after decades of trying to counter this threat have we still not made any headway in solving it? There are many answers to this dilemma, but one of them concerns the ways we’ve approached the issue in the past. By relying on technologies that can be easily replicated (yes, holograms come to mind) and the fact that human observers (both inspectors and consumers) have had to rely only on their eyes to distinguish between real and fake items, we have walked away from that fight and handed the win to the criminals.

In looking at alternative solutions, it is also true that not all digital technology offerings can be a cure-all, and I have argued for example that serial number authentication is as poor a technology as any out there. It is actually unfortunate that such an offering is even currently available, given the ease with which openly visible product-level serial numbers can be copied and placed on fake products. And similarly, I have argued against the use of open-format QR codes because of the ease with which they can be hijacked by the counterfeiter.

The digital era of brand protection has recently entered a new and exciting phase with the introduction of fingerprinting technologies. These offerings promise all of the benefits of digital engagement and give you a simple “yes” or “no” regarding product authenticity. And yet, they remarkably suffer none of the security drawbacks that have plagued other digital offerings of the past. It is in fact the perfect union of form and function to create the most robust and unassailable technology offering in the current landscape. And it can happily coexist with any of the overt features to provide a tandem visual-digital solution.

Consider the tax stamp example in the figure below. There is a digital component (2D barcode with an embedded unique serial number) accompanied by a number of overt visual features. Let us remove the barcode from this security label and only deploy the overt features. That is precisely what has been done in the past. And in turn, the counterfeiters have had free run, not only because many of these features could be so easily replicated (often close to perfection), but due to the fact that the very sensory system that has evolved to serve us humans so well in our daily lives is simply incapable of cutting through the clutter to make an absolute determination of product integrity. The dramatic rise in counterfeiting over the years testifies to this failure, and to the outright chagrin of brand owners, governmental revenue authorities, and hapless consumers.

But a new era is upon us. By reinserting that central barcode and having it fingerprinted, a robust new digital technology is introduced that transforms the previously dumb security label into a smart offering, one that is reliably consistent in the analysis outcome. There is no room for a false interpretation and therefore no room for an error. Digital technologies with the fingerprinting addition now offer that absolute certainty.

Our eyes alone simply cannot provide that same guarantee. And therein lies the criticality of this requirement — not a single fake product should enter into the hands or homes of the consumer. We now need to win that fight more than ever.